From Mathematics To Color Perception

Let us see if we can model color perception using some interesting Mathematics:

Such a spike is basically a short electrical discharge. In Maple, it can be modelled as:

The above is just a short triangular spike. Let's see it:

Now we transform the pulse above to a periodic signal:

Note that period = 1/f, where f is the frequency of neuron firing, and these frequencies can be practically taken to BE the values of the functions x(λ), y(λ) and z(λ) on the CIE 1931 Color Matching functions diagram:

And the combined signal will be:

All three signals in the periodic time domain for λ=555nm

The above signal is equivalent to the plain electrical impulse signal:

Combined signal in the periodic time domain for λ=555nm

The above plot is a codon for the color which the eye perceives when it looks at λ=555nm on a continuous (or discrete) spectrum in a spectroscope (Note that the blue signal is almost non-existent in the time domain). Such would be the signal generated for an eye stimulus for a spectrum similar to the spectrum of Tl, for example: 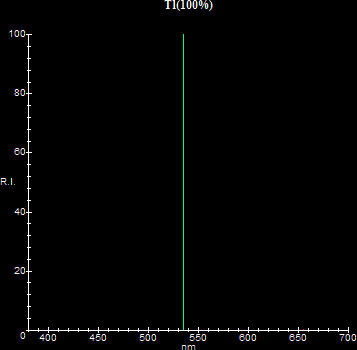 The mathematical details of how the brain interprets the modulation of the signals and averages between them to produce the sensation of color, are used in this article to simulate color perception and to generate some Lamp Engineering applications.

Then, variations in color generate the sensation of shapes and symbols, resulting in conscious recognition. Add to that one slightly different signal from the second eye, and you have distance estimation.

The keen observer will notice that this model's most amazing characteristic is an incredible transition, the transition from discreteness (three signals in the time domain) to (perception of color) continuity. That's the miracle of Color Vision!